This was exhibited in the 59th Japan Traditional Crafts Exhibition.
The “Road of Light” product has become a breakout product for me.
Fortunately, it received the new face award at the Japan Crafts Exhibition.
It is also a product that has led me to the discovery of my own style.
Light released from a single light source spreads out, and this links to life itself.
That was the image with which I produced this work.
Therefore, items designed around a flower or a bird appear within the image of light, and express the fact that light is the source of life.

Put another way, this does not only mean that light is a blessing from nature, but rather that it is also a symbol of civilization for the modern age.
With the invention of blue LED, the color of the town as a whole has drastically changed.
The urban light is also attractive.
The “Road of light” has an awareness of an urban image.
It is the molding that expresses this.
The shape of the multi-sided box has an awareness of the sense of speed found in cities and the molded beauty of linked buildings.
I feel that placing the contrasting images of natural light and urban light within one product gives power to the product with its striking Makie gold and jet black colors.

Furthermore, the line splitting the gold and black is inlaid with tortoiseshell (like the shell of a tortoise), but I feel that this is a softer brown neutral color.
There are complex techniques incorporated within the simple impression, and these kinds of products that I would hesitate to create now would have been made by me during my 20s.

During that time, I was causing a lot of problems for my parents, so around that time I gave up using a single lacquer.
It was when I decided to make this product my last one, and continue to produce while working, that I received this award, immediately after making my application for WEB vocational training school.
I remember that this work was made during a really complex time for me.   The box is divided into two levels and has leather on the inside. 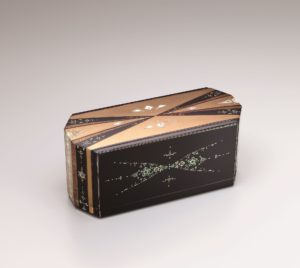 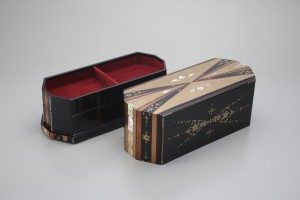