Think about it for a minute.
The difficulty of photographing a black, glossy, 3-dimensional object without including your own reflection.
It is not just yourself, and jet black reflects the fluorescent light on the ceiling as well as everything else in the room.
If we want to film the lacquered work perfectly, it is necessary for us to build a very elaborate set. 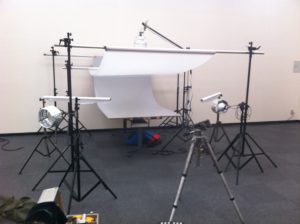 This requires a technique in which you somehow apply light without allowing that light to be reflected.

Even people generally regarded as still life professionals have a struggle with lacquered works.

Today, I went to a studio in Ikebukuro to take photographs for a private exhibition.

I asked Nakajima-san to assist with the photography

Nakajima-san is a photographer who specializes in the craft field, in particular capturing lacquered works.

In the past, I photographed the works of teachers whom I considered to almost have the status of superstars.

Every year they photographed for the Tokyo National Museum and Museum of Modern Art.

On this occasion, I had one special request in regard to the photographing of my work.

“Let’s go with a black back”

A black back means setting the background color for the photography to black.

Often such works are photographed with a gray background and the pictures of works that we are used to seeing in pictorial records are nearly all gray.

There are several risks involved in photographing with a black background.

Firstly, if the work is black and the background is black, this will detract from some of the attractiveness of its blackness.

It was not only me facing this problem, but was also mentioned by the photographer Nakajima as well.

Although he had been photographing with a gray background for decades, and was a top professional doing so, he responded to my difficult request.

He changed the position of the lighting several times and managed to capture it in a way that brought out the differences in the black. What a pro!

Another thing I was concerned about was that if photographed with a black background, the work would tend to look old.

You never know how these things are going to work until you try them and when photographed with a black background, it gave a really heavy impression.

It needed to have a positive image, such as having a sense of class or  profoundness, but there was also a danger that the image would be of something dark or ancient.

As far as I was concerned, it was the photograph that I was expecting, and I felt that the image I had of my own product was faithfully reflected in the photograph.

I am looking forward to seeing how this product group photographed against a black background show up. 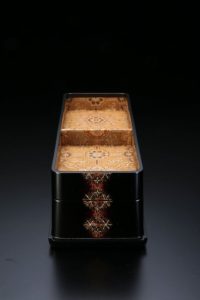 The entire photograph has been uploaded to our FaceBook page.